Below is a story of an ancestry adventure during our time in Norway on 7/19/2018.

My friend Joe (now living in Stockholm) and I hopped in a rental car in Oslo to head north based on the following picture. 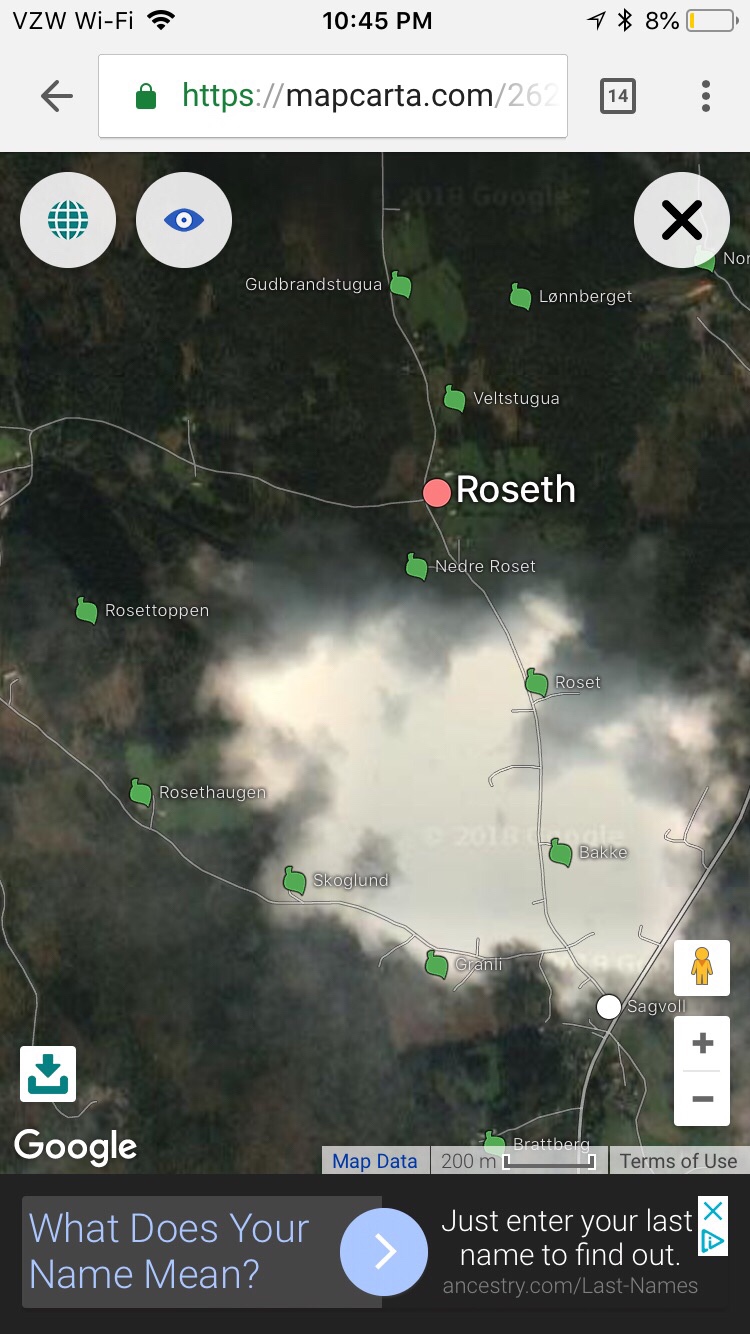 In preparing for the trip, My Uncle Roger told me there was a town named Roseth – much to my surprise.

Mapcarta (not Google Maps – it doesn’t show up there) says the area known as Roseth is near a town named Raufoss, just outside the larger town of Gjøvik, a couple hours northeast of Oslo in Oppland county. We turned off highway 4 onto Salvolvegan and then onto a road called Rosetvegen.

We started seeing signs for Roset. 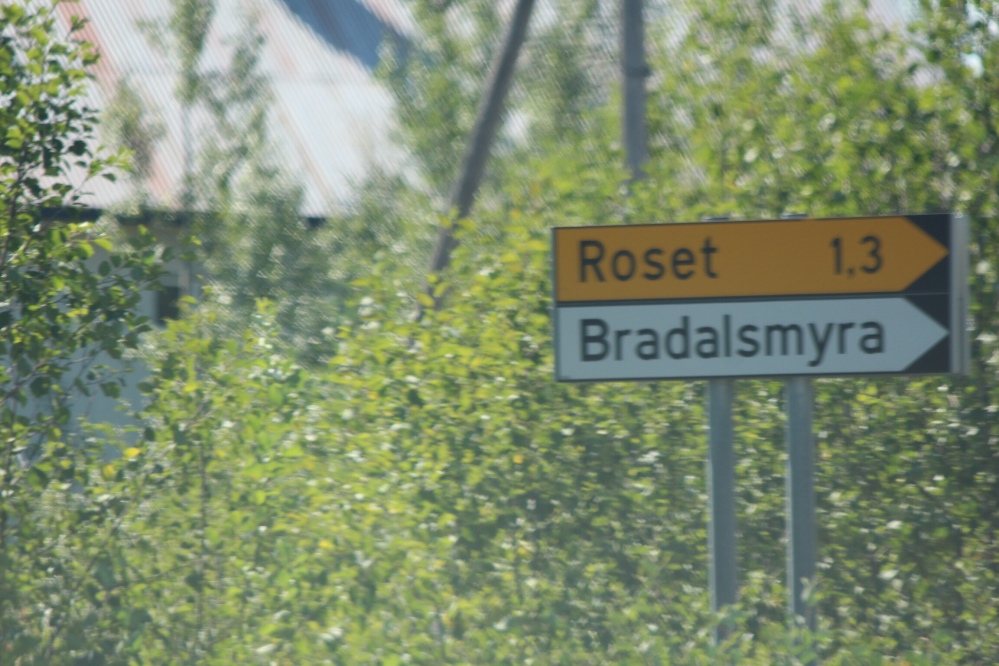 We stopped by what looked like a small memorial park with an info board. 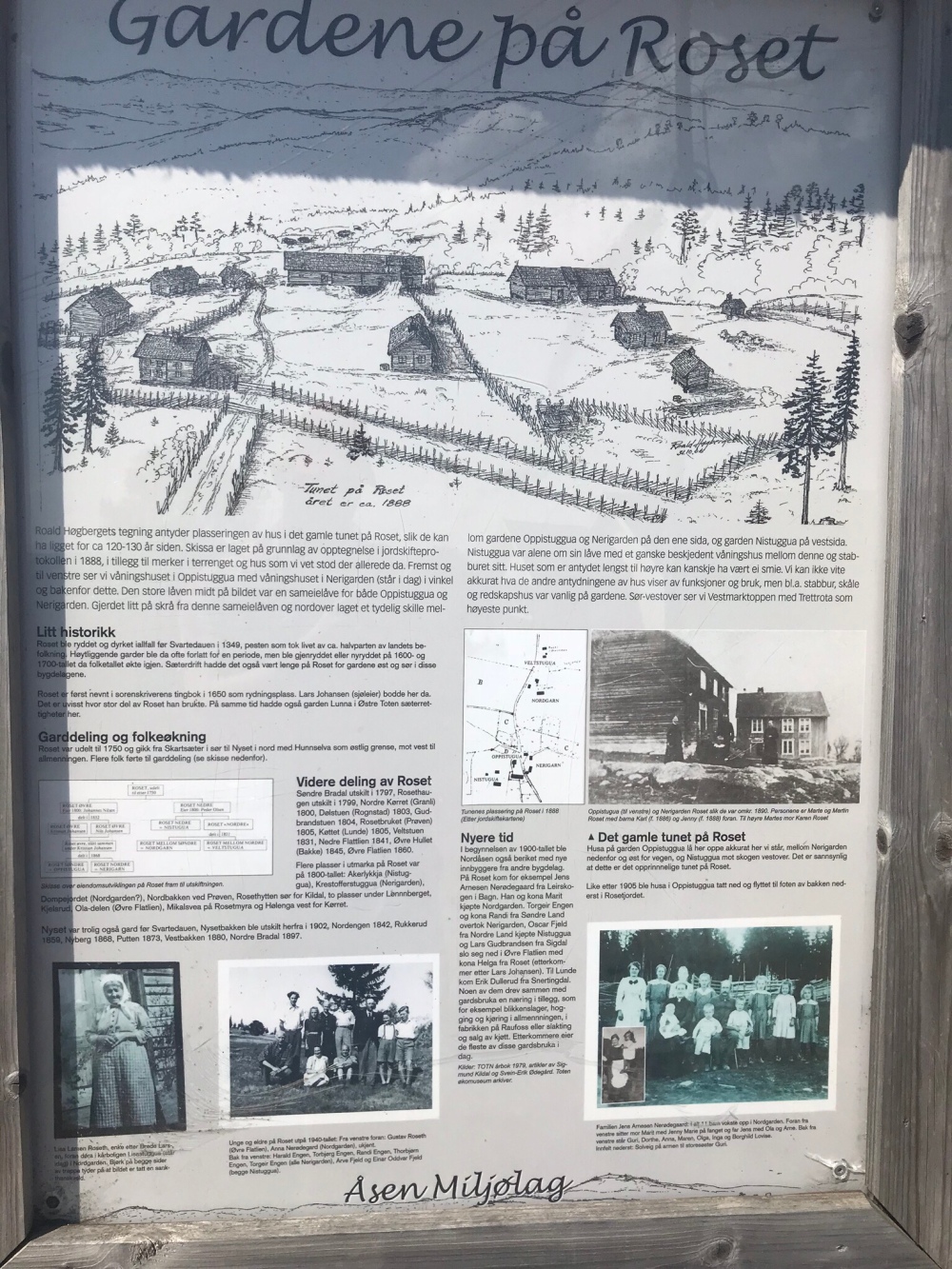 I looked over and the view of the valley from this vantage was amazing.

We looked around for a bit and took some pictures.

I saw someone in the window and waved hello.

I walked towards the house and she opened her door. She spoke English and said her name was Greta. I told her I was from Minnesota and here looking at the region for my ancestral roots and that my name was Roseth.

This piqued her interest and she said, this area is Roseth. Joe came over and we chatted about the area a bit. She said that this property was in the family since the 1920s, and had been purchased by her late husband’s parents. Her husband was born in the house. She and her husband lived in the area, then moved to Canada for many years and recently moved back to take over the property. She mentioned we should speak with her Brother in Law, Åvoe. and she asked if we could stay for coffee.

We waited in the living room as she called her brother in law. The house was a beautiful old house with large plank flooring, a beautiful old white fireplace, and large custom windows. Inside were spinning wheels, woven rugs and decorations, old woodwork, and a beautiful piano with a beautiful Burl finish.

Inside were the pages listing off all of the farms in the area, of particular interest were the ones that started with Roseth in some form. 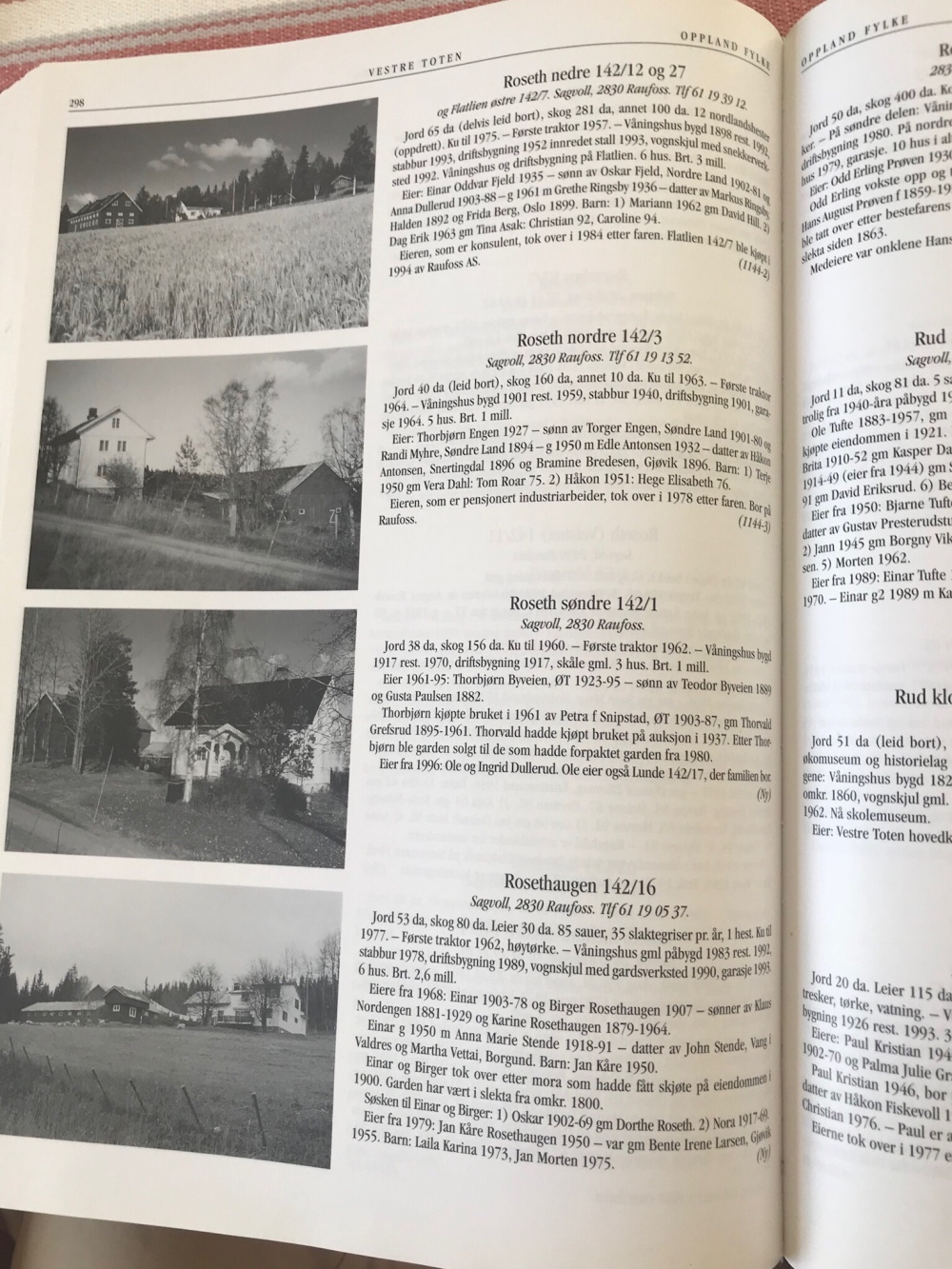 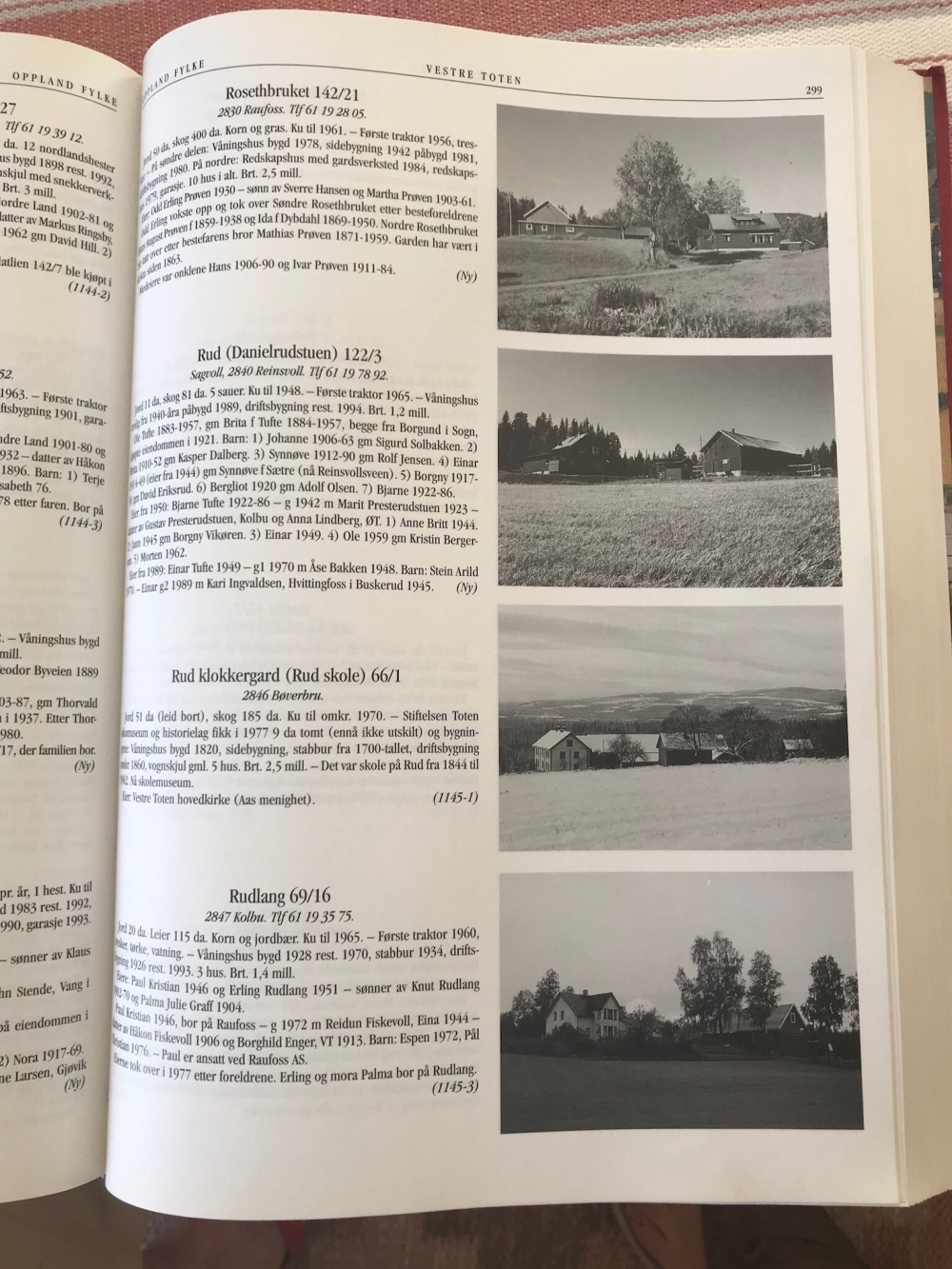 The pages list the farm and the residents. Pretty major score for us.

Åvoe came over in his van and stood with us as Greta introduced us. She told him we were there from the states and that my name was Roseth. He looked very intrigued by this. I handed him my ancestry report and he looked it over, still seemingly a bit fascinated that I use the name Roseth. He asked if he could keep the printout and we left it with him. He was pretty surprised to find out that the person on the right of the list was standing in front of him! He confirmed several times that we actually use the name Roseth.

They told us about how the Black Plague (Svart død) wiped out the area in Norway. Åvoe said the original farm stretched all the way down to the river.

This was a huge farm.

After the plague ripped through and the area was re-established it was cut up into a number of farms – hence multiple variations of the Roseth name.

Åvoe then took us over to see the cabins.

The cabins both looked quite old. 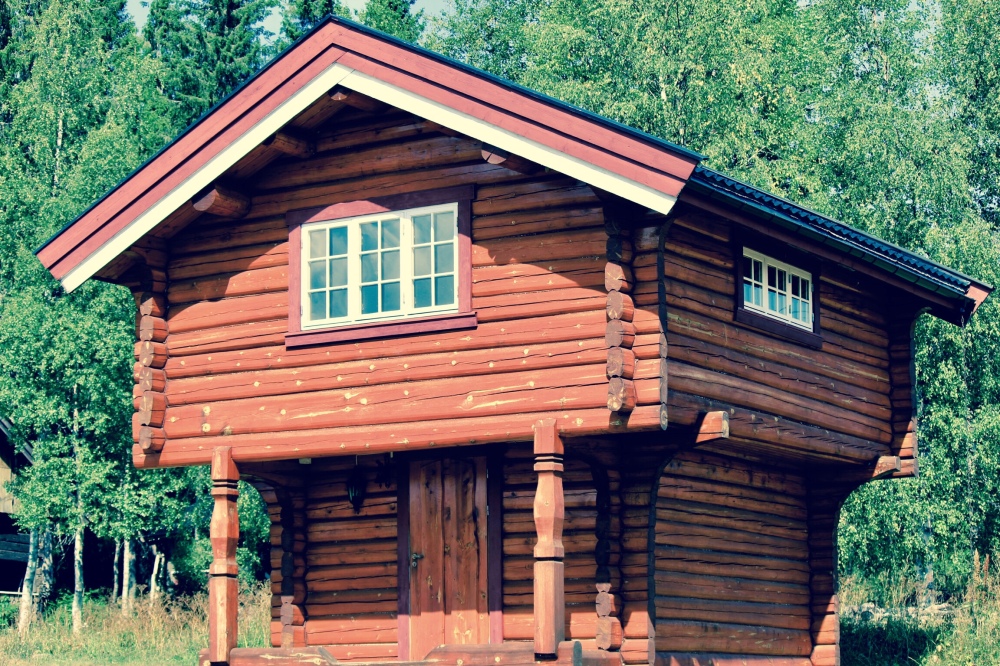 They had actually been moved there from other properties.

There was even an old blacksmith shed (actually the newest of those three buildings).

The inside of the red-trimmed cabin was like a museum. Åvoe likes antiques and hunting and he said the sometimes have family gatherings there. 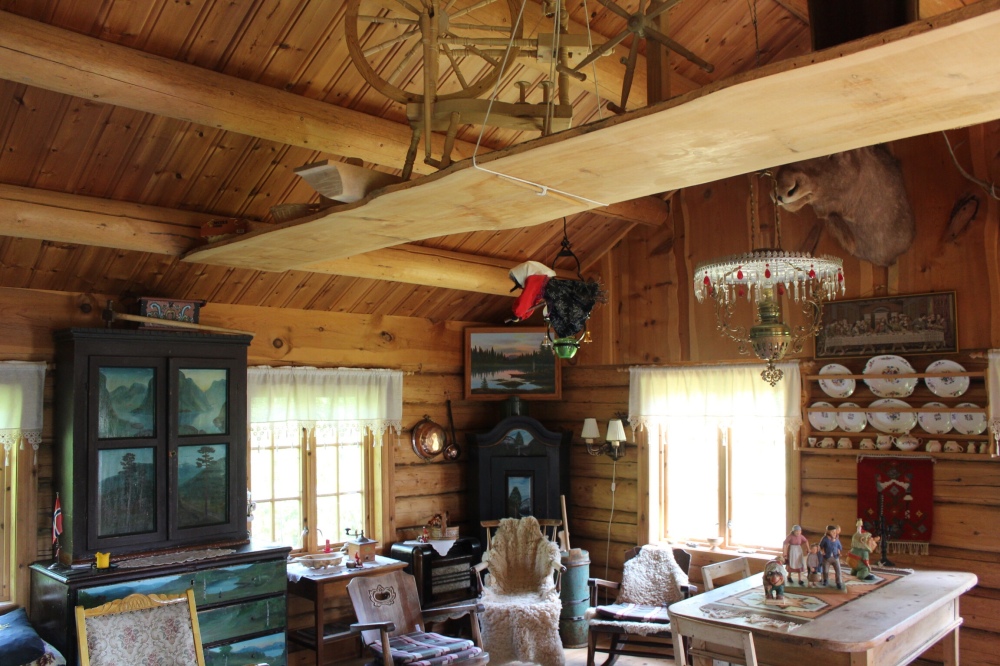 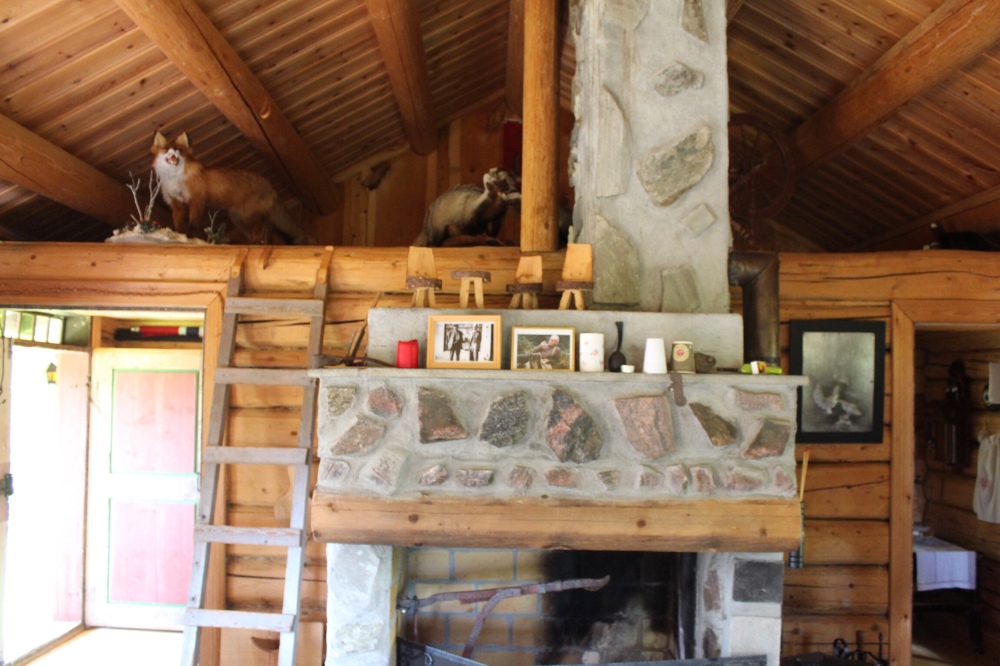 Including an original telephone from the original Norwegian telephone system

And an old stove with a special “apostles iron” for baking sacramental bread with the imprints of 12 apostles. (He got this at an auction while he was outfitting the cabin.) 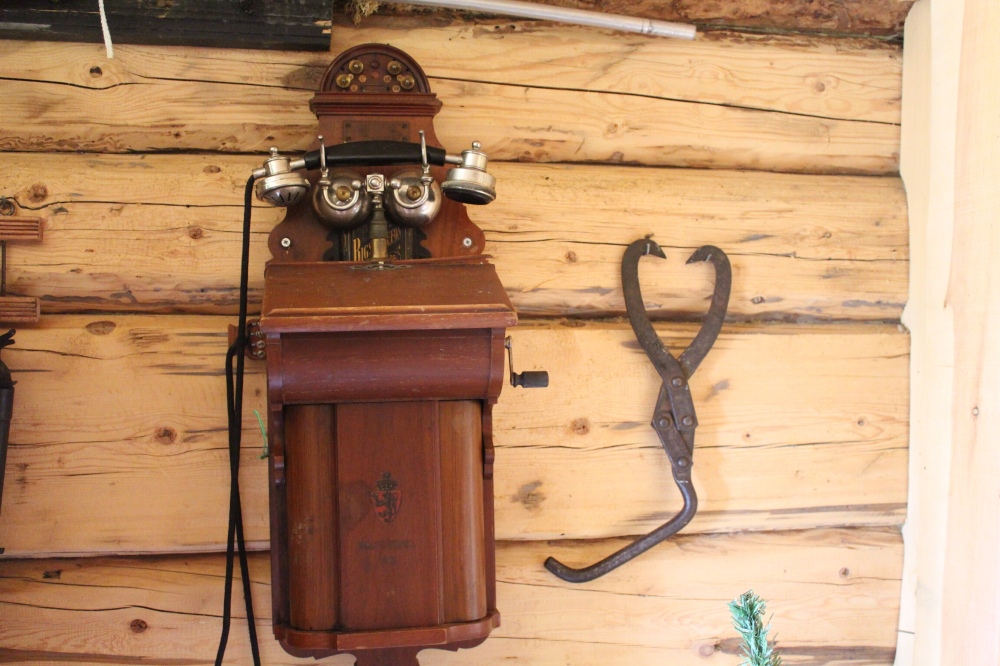 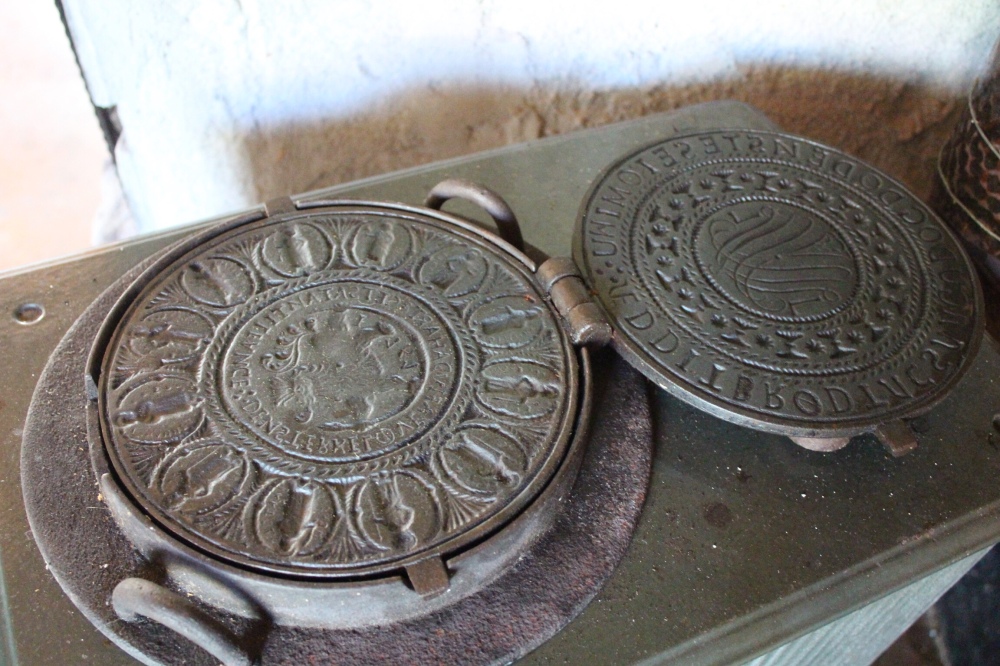 And an old witch from Norske folklore.

The second cabin had a short door, and we went up the stairs to the second floor. The smell of old wood, oil, and tar smelled wonderful. It gave the sense of how old this country is.

After the tours of the cabins, we came back to the house to find that Greta had prepared us lunch and coffee (un.real).

We had sandwiches and terrific pastries and coffee and chatted about the region, the history, what we each do and more.

Greta and Åvoe would bounce back between English and Norwegian. They were quite good at English and largely understandable. We did struggle with Åvoe a bit at times and Joe was able to help with a few words similar in Swedish.

They suggested we look into the records in Hamar Statsarkiv, there they would have more information on residents over the centuries.

This is the farm that we visited

Of course a selfie or it didn’t happen. 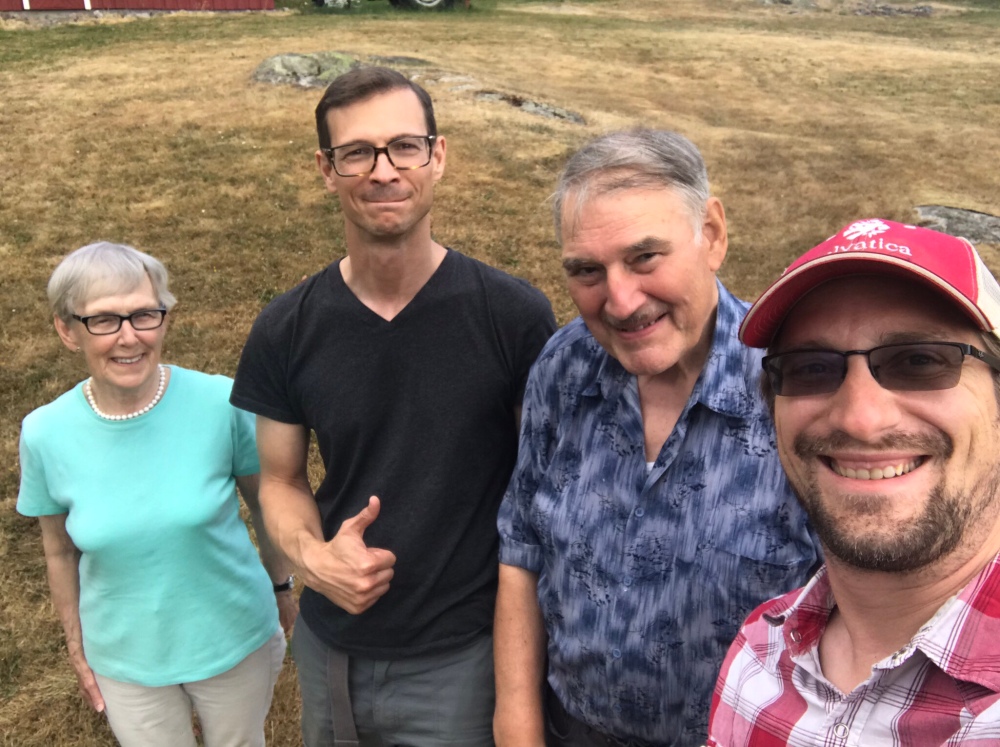 On the way out we could see the town of Raufoss from the peak. Stunning View.

From here we went on to find the Ellingstad side of the family.

This was an absolutely amazing experience for which I am quite grateful. I learned a bit more about my origins, was welcomed in by some wonderfully nice people, and saw the incredible Norwegian countryside, which is one of the best I have ever seen.

Reminded me a bit of Minnesota. Felt like home.